Feb 24 MWC Update: turns out this is the all-new MateBook 14.

A 2019 successor to the Huawei MateBook X Pro is coming, and it’s looking good — at least in these documents from the U.S. Federal Communications Commission. 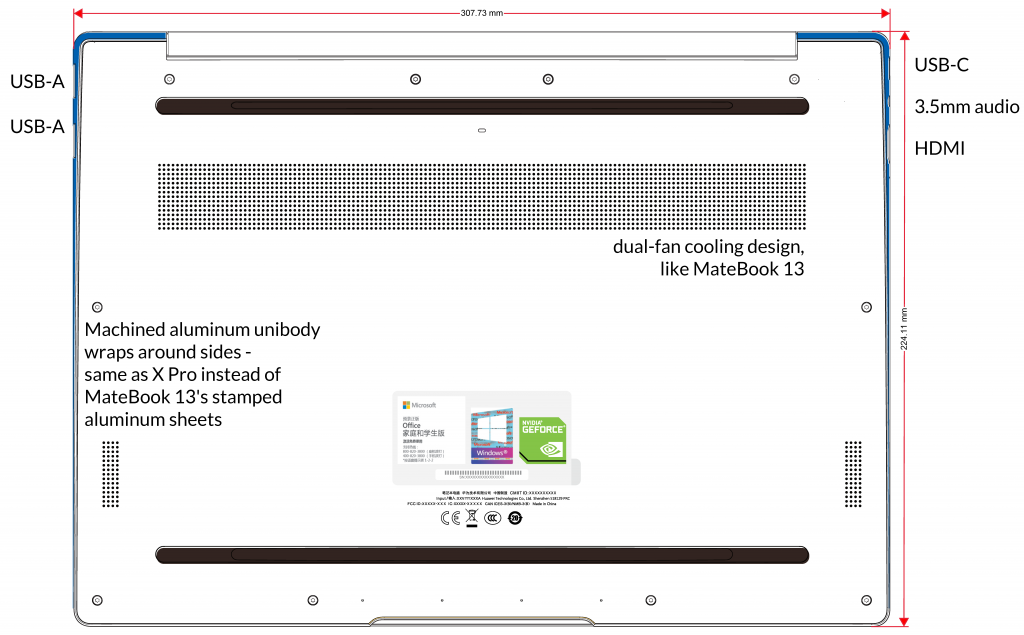 At first glance, the updated MateBook X Pro looks very similar to the MateBook 13’s bottom, with a wide air intake for a dual-fan cooling system. However, you can see that this is a more premium laptop: it has a machined aluminum unibody just like the current X Pro, while the MateBook 13’s body is composed of multiple, cheaper, mostly two-dimensional stamped aluminum sheets.

Measuring the body drawing to-scale, the new MateBook appears to be roughly 4mm wider and 7mm taller. So, we may be getting the webcam on the top bezel, or a slightly bigger (14″?) screen, or thicker bezels in exchange for more internal space, or none of the above — Huawei’s drawing may just be distorted.

Judging by the sizes and shapes of the connectors on the sides, there are two USB-A ports, only one USB-C port, a headphone jack, and a full-size HDMI port. This is a strange choice of I/O for a 2019 ultrabook — if the drawing is to be believed.

From the SAR test document, we now know the spec variants:

It’s surprising to see an i3 option with only 4GB of RAM, and strange that Huawei is giving the X Pro an i3 option while the more budget-oriented MateBook 13 starts with an i5.

The document lists the battery as 7410mAh × 7.6V ≈ 56.3Wh. The choice to continue using the low voltage is disappointing, as it can bottleneck performance when on battery.

The discrete graphics option will most likely be a 25W Nvidia MX150, just like the MateBook 13.

The new model will perform much better, especially under heavier load, than the current X Pro, thanks to its much more adequate cooling system.

As I previously mentioned, Huawei has been testing this device since last fall. It is very likely that Huawei will announce the new MateBook at MWC Barcelona in late February, as they did last year. China started getting the MXPro in April, and other markets followed in the summer. I hope Huawei quickens their pace this year.

Here is the label document that FCC has on record for the MateBook 13, a.k.a. ‘Wright’ or WRT-WX9.

Do you notice anything wrong with this drawing, other than, of course, the misspelling of ‘label’?

Now look at this drawing, superimposed onto the KLV-WX9 from the beginning of this article:

Besides different feet and speaker grills, these are identical drawings!

This is not the MateBook 13. This is ‘Kelvin’, the 2nd-gen MateBook X Pro. More precisely, an early revision of it from June 2018.

This leak has been sitting on fccid.io since November. I can’t believe nobody picked up on this until now!

Thanks to Hans-Joachim Vogel for the tip to look at FCC info!

You can look up specs and teardown photos of millions of devices on fccid.io. Let’s all try to dig up something!

There is another Matebook model mysteriously codenamed KPR (Kopernikus?) on the Bluetooth certification website: https://launchstudio.bluetooth.com/ListingDetails/3248 Published on 2019-01-29 as both Huawei Matebook and Honor Magicbook: KPR-W09 KPR-W19 KPR-W29 KPR-W39 What could it be? New Matebook X non-Pro or Matebook D 15′? Or maybe a new Matebook D 14′? – as… Read more »

There again seems to be a camera drainage hole (centered towards the back), which suggests to me, they kept the hidden camera. For those wondering, where this is coming from: There is exactly sth like this on the current MXP which is descriped as the camera drainage hole in the… Read more »

With only one USB-C port will it still be possible to charge the device while using an eGpu or an external Monitor via Thunderbold?