If your CPU frequency is being reduced under load, even at low temperatures (below 90°C), then you probably have power limit throttling. Here’s how to disable those power limits.

Warning: disabling your power limits may cause your computer to run at levels of power beyond its design. Make sure you keep BD ProcHot on. If BD ProcHot kicks in, your VRM is not getting enough cooling and you need to decrease the power limit or improve the VRM cooling.

How do I know I have Power Limit Throttling? 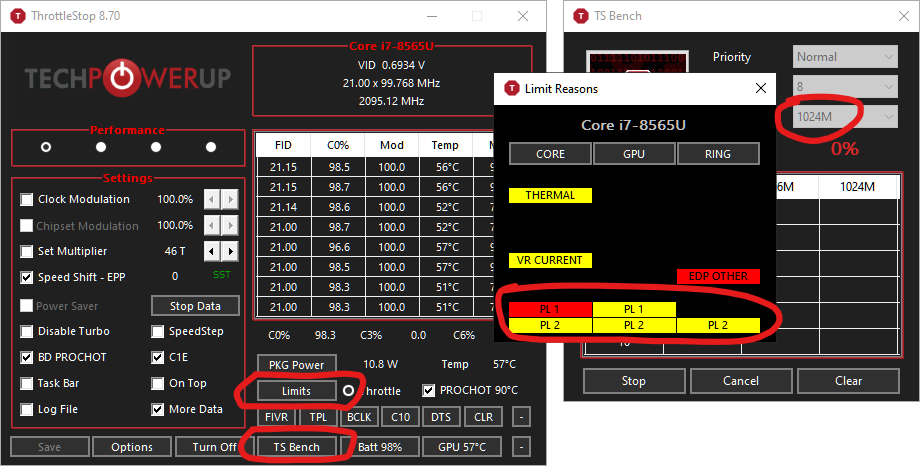 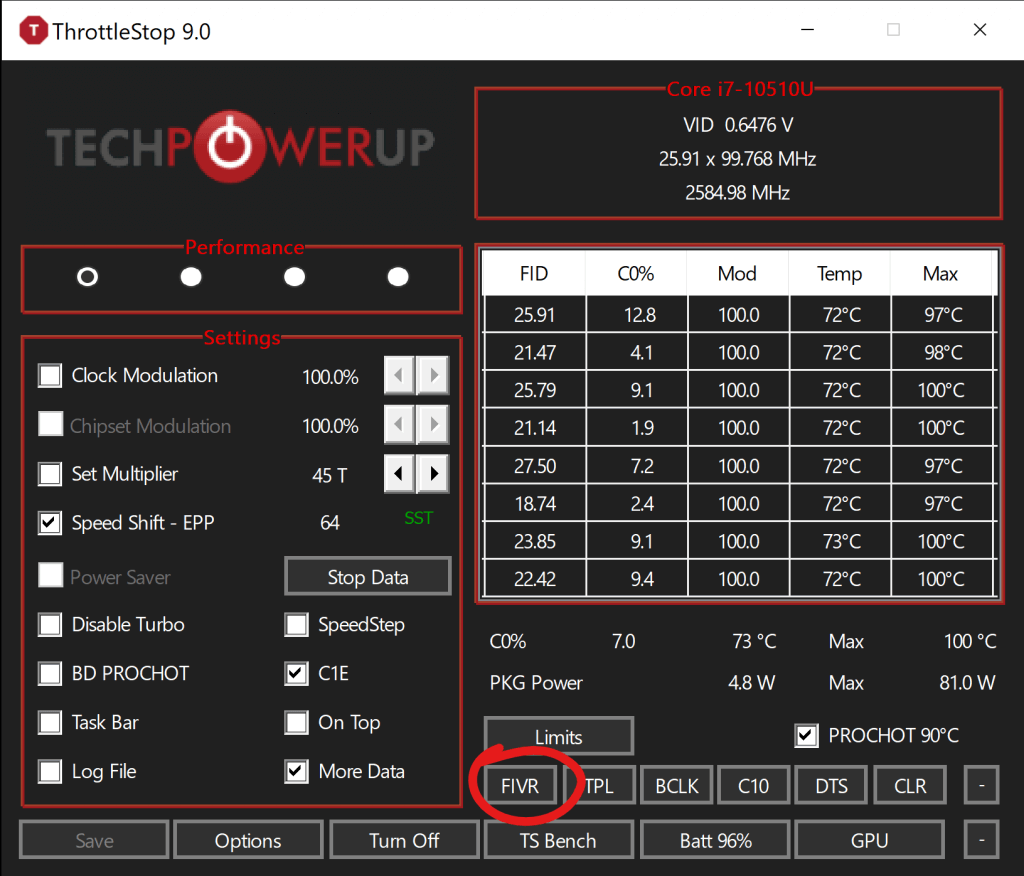 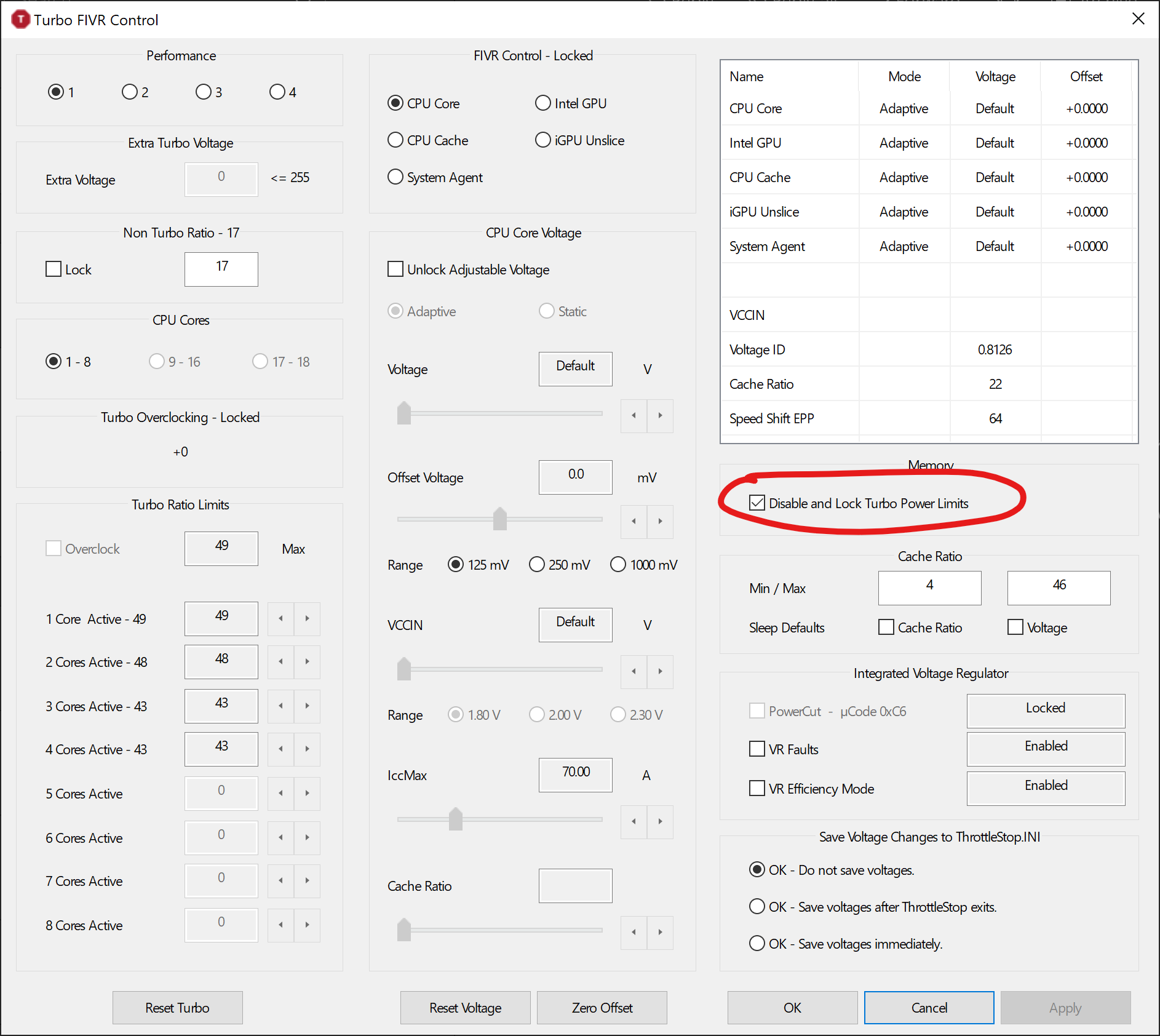 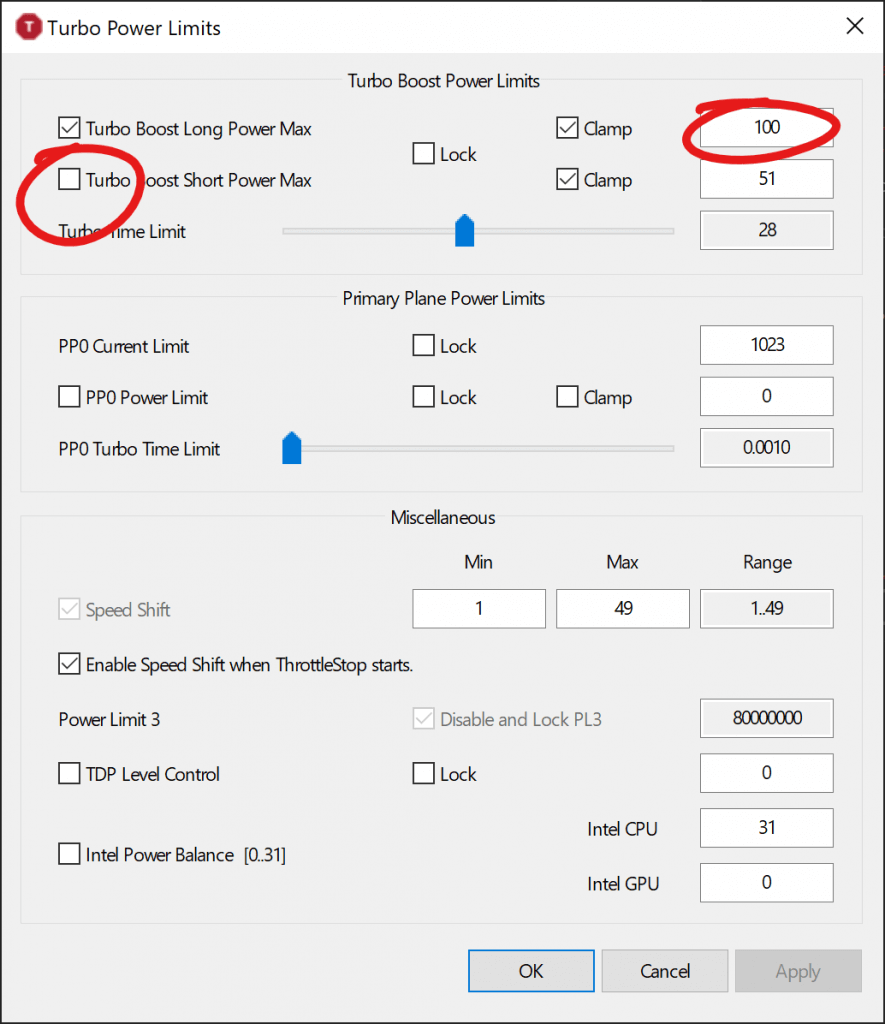 Now, when you do a stress test, the only Performance Limit Reason (check in HWiNFO) should be thermal throttling. This way, you let no other factor keep you from maximum speed besides the temperature of the CPU itself.

Much like in overclocking and undervolting, run tests to make sure your system is stable with your settings.

A lot of laptops have further Power Limits controlled by the Embedded Controller, which is much harder to change.

Special thanks to UncleWebb for developing ThrottleStop. You’ve single-handedly made Intel laptops so much better.

So if how can i know the default icc max of the CPU to turn it back? I dont remember the number on the 2018 matebook x pro and reseting only does the voltage

I did not dare to change current limits, however this worked well for hours on XPS 9560. Temperatures were stable between 78 and 81°C, maximum being at 88° for all cores. HWiNFO reported no issues. Before that DPTF was kicking in every 10-15 minutes reducing the clock speed to a… Read more »

It would be great if this could be implemented BIOS wide. My MBXPro 2020 is throttling to 1.8Ghz even though it barely reaches 60 degrees C and the performance is just absurd. macOS doesnt support throttlestop, so kinda lost here.

Brad, thanks for the guide. I successfully applied the knowledge to my Lenovo T480. It used to throttle like crazy, winding down to 500 MHZ or so. After adjusting the power limits, it apparently can render all day, with the CPU steadily pulling 25 W, the MX150 running at full… Read more »

ACER SWIFT 5 sf514-53t working very good with this tutorial. With modified cooling system i have very good results. Thanks man

Can confirm, this works well with my Dell XPS 9560. Previously it power throttled when VRMs reached around 81C, then the VRMs dropped to the low 70s and stayed there. Now, VRMs reach constant 88C without any throttling, haven’t tried pushing it further but so far seems to do the… Read more »

So far this program is amazing. I’ve been trying to find a cure for the XPS13 and Precision 5520/30 for years. I’m finding you really only need steps 1-4 in this guide and check the box to “disable and lock Turbo Power Limits” Still testing but so far UncleWebb is… Read more »

should i check or uncheck the clamp in short power max?like you showed in the tpl settings pic.

Hi, first thanks for the tips. So, i have a Inspiron 7559, i5 6300 HQ and GTX 960m, with 16GB ram… I fall here in search of a solution for my micro stutterings in some games. On this way, i found the solution of uninstall the intel drivers frameworks… At… Read more »